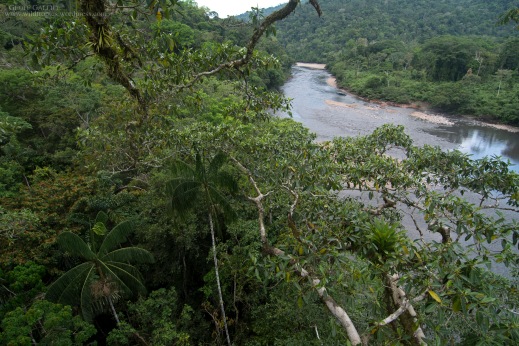 Deep within Peru’s Bahuaja-Sonene National Park, two rivers—one crystal-clear and strewn with rapids, the other swirling and muddy—converge to drain the pulsing heart of one of the world’s richest rainforests, a place known as the Candamo Valley. The indigenous Ese Ejja Indians call the region the ‘Last Forest Without Man’—a reference to the area’s extreme remoteness and the fact that no people, not even the Indians themselves, have ever settled here.

Candamo is one of the few remaining large, pristine rainforests left on the planet—tropical forests nearly everywhere else have been destroyed or degraded as tropical countries have scrambled over the past few decades to convert their natural resources into quick wealth. Pristine areas like Candamo factor heavily in an ambitious plan by tropical conservationists to bring humanity into the age of globalization while losing as little of our biological heritage as possible; only large, undisturbed areas can harbor the high numbers of species that will allow this to happen as surrounding forests disappear.

I’m here to survey butterflies—while detailed information are still lacking, some evidence suggests that as many as several hundred butterfly species might be declining throughout the tropical Andes and western Amazonian ecosystems. The reason? A rapidly growing human population, agricultural expansion, and increasing global demand for oil, timber, gold, and other natural resources have all devastated the rainforest habitats that butterflies depend on for survival. In Candamo, butterflies have a safe haven. 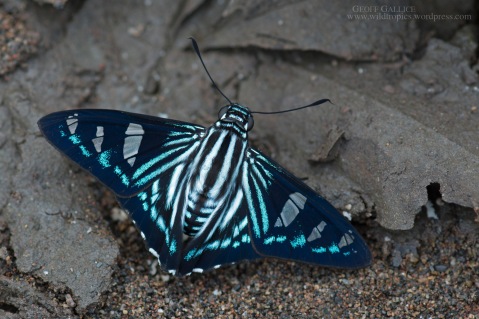 A sabre-wing butterfly from Candamo, one spectacular example of the thousands of species found here.

And while biologists currently know almost nothing of Candamo’s rich plant and animal communities, news from other, better-studied protected areas in the region are promising. Peruvian researchers working in the nearby Tambopata Reserve, for instance, have found more than 1,300 butterfly species alone, in only a few months of sampling at a handful of locations. So far, the protected areas are working.

Butterflies, of course, aren’t the only beneficiaries of these conservation areas. As I patrol a floodplain forest in the Candamo Valley with my butterfly net, the telltale signs of another rainforest inhabitant call my attention—the sound of crackling twigs and leaves and crashing as dislodged dead branches tumble onto the forest floor belie the presence of primates. Judging by the noise they’re making, I guess they are spider monkeys, among the largest arboreal mammals in this part of the world. As they approach even closer, I see that I am right.

Before I realize what’s happening, a huge dead branch comes crashing towards me, and explodes above my head and all around me in a hail of decaying shrapnel, complete with a swarm of angry, biting ants. Five seconds later, as I furiously pluck the ants away, another one. And another. I quickly realize I’m under attack.

As I look up, I notice around 10 monkeys staring down at me. One is shaking violently on the branch he’s on, staring me dead in the eyes. Another announces to the rest of the group with a special vocalization, “Get over here, you gotta see this!” These monkeys have never seen a human being.

This Peruvian spider monkey, Ateles chamek, has never seen a human being.

In one of those magical moments I thought only happened to National Geographic explorers or, more likely, adventurers from a time long passed, we exchange incredulous looks—me, astonished at the unusual curiosity displayed by the primates above my head, and they, not knowing what to make of the bizarrely-clad, clumsy ground monkey. These animals have no fear of humans, which can only mean they have never seen any; elsewhere, monkeys flee intruders that would put them on their dinner plates.

After only a few short days I leave Candamo armed with a few new records for butterflies, but also with something greater. My experience here reminds me that there is still hope for conserving the greatest natural gift with which we humans have been endowed. In places like Candamo, monkeys live without fear of us, and we have a place where the raw, wild spirit of nature lives on. Indeed, we are greatly enriched by this place.