Another species of primate from Tambopata, this is the black-capped squirrel monkey (Saimiri boliviensis). Not counting the tiny tamarins, these are the smallest monkeys found in the rainforests of southeastern Peru and, as their common name suggests, are about the size of a squirrel. Squirrel monkeys forage in very large groups of up to one hundred animals or more, searching mostly for fruits and insects, although they will take small vertebrates like tree frogs or baby birds. Interestingly, here in Tambopata they can almost always be found foraging alongside the much larger brown capuchins (Cebus apella). Biologists have been trying to figure this out for decades: brown capuchins can be very aggressive, and animals the size of squirrel monkeys even make up an occasional part of their diet. So the question is this, Why do squirrel monkeys travel with the capuchins? Put another way, why do the capuchins tolerate the squirrel monkeys? 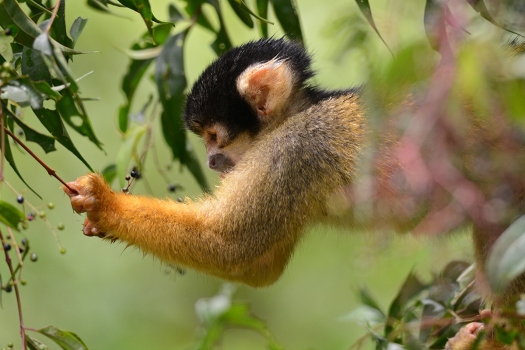 A recent study by Taal Levi et al. (2013) in northeastern South America showed that squirrel monkeys tended to be more abundant where brown capuchins were present, lending support to the long-standing hypothesis that the two species facilitate each others’ foraging. That is, more eyes on the forest might make it easier to find patchily distributed foods, such as fruiting trees or large caches of insects. Alternatively, larger groups might provide better protection from predators, as both species are food for a variety of species ranging from cats to snakes to even birds of prey. Teasing apart the importance of the various benefits associated with mixed-species groups has been difficult, and we still have much to learn.