The Kapok tree and the incredible physics of water transport

The Kapok tree, known to science by its Latin name Ceiba pentandra, is a true rainforest giant, perhaps the largest of all Amazonian trees, and among the largest trees in the world. Biologists call the Kapok an ‘emergent’ tree—that is, it emerges from the forest canopy and, with individual trees being measured at 150 ft. or more, easily towers over the rest of the forest. 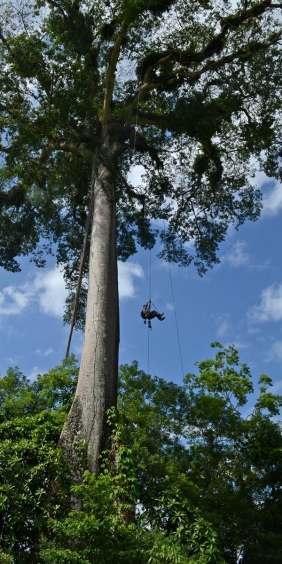 Biologists wishing to study the rainforest canopy must fight huge gravitational forces that work to keep them on the ground—to do this, they use ropes, knots, specialized gear, and lots of muscle power. How do large Ceiba trees transport thousands of liters of water to their crowns without the use of muscles, pumps, or other technology?

Being very tall presents a number of problems for a tree. First of all, the emergent crown of the Kapok, unshielded by its diminutive neighbors, stands ready to catch any large gust of wind that might come along. And, with a shallow root system common among tropical rainforest trees, the Kapok faces the very real danger of toppling over during storms that occur frequently across the tree’s geographic range.

The Kapok solves the wind problem with buttresses—large, triangular projections that connect the tree’s trunk with the roots in the ground. Indeed, the buttresses of a mature Kapok can be impressively large, and they are very effective. In a study of other buttressed rainforest trees on the tropical island of Borneo, trees that had their buttresses experimentally removed by researchers quickly fell.

But wind isn’t the only factor potentially limiting a tree’s size. Emergent rainforest trees, like all other plants, require water, and extreme height poses a monumental challenge in the uptake and transport of water from the roots—from where water is drawn—to the leaves, where it is needed most, high in the tree’s canopy. 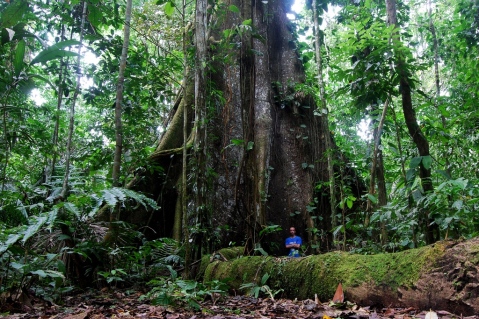 A Kapok tree in the Ecuadorian Amazon, supported by massive buttressed roots.

Given its towering height, how does the Kapok get water 150 feet or more off the ground?

The answer is best explained by physics. More specifically, it is largely capillary action that allows the tree to transport water so high.

Two fundamental phenomena underlie the capillary mechanism. The first is cohesion—the weak chemical bonds that allow individual water molecules to attract one another. Cohesion is responsible for the fact that a drop of water resting on the top of your hand, say, retains its rounded shape. This can also be thought of as surface tension—the reason that small insects can glide across the surface of a body of water. The second phenomenon underlying capillary action is adhesion—similar weak bonds that allow water molecules to attract, or adhere, to other substances. The reason, say, that the same drop of water will cling to the top of your hand when turned upside-down.

Cohesion is the result of hydrogen bonds between water molecules.

At the very top of the Kapok, in the tree’s crown, tiny pores known as stomata on the surface of the leaves open directly to the atmosphere. Rays from the sun strike the leaves and provide the energy needed by water molecules there to evaporate. The stomata are the exit points of the woody xylem—essentially long, thin, tube-like vessels that extend from the leaves, unbroken, all the way down through the tree trunk to the roots. As a water molecule breaks the surface of the water column in the leaf’s stoma and evaporates, cohesive forces cause it to tug upwards on the molecule or molecules directly behind it, which in turn pull on other molecules, and so on all the way down each xylem vessel to the roots. 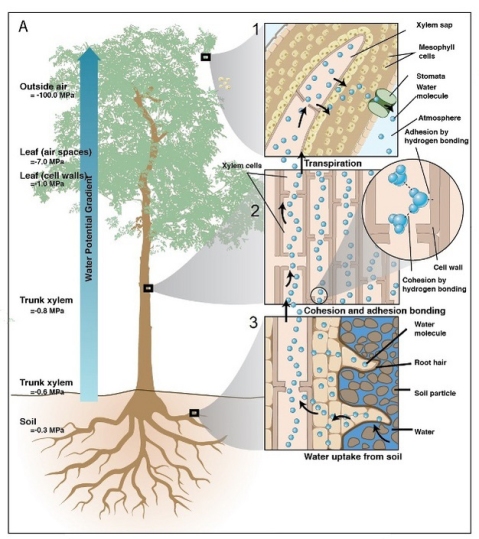 Water moves from areas of high water potential (i.e. close to zero in the soil) to low water potential (i.e., air outside the leaves). Details of the Cohesion-Tension mechanism are illustrated with the inset panels (A), where tension is generated by the evaporation of water molecules during leaf transpiration (1) and is transmitted down the continuous, cohesive water columns (2) through the xylem and out the roots to the soil (3). Image © 2013 Nature Education

Through capillary action, the tree is able to fight the enormous influence of gravity and transport the water it needs to incredible heights—all without the aid of any active pumps or large amounts of energy input. And the process is incredibly efficient. A single Kapok tree might be able to transport as much as 1,000 liters of water to its crown in a single day!

With the problem of water transport solved, the Kapok is free to invest in other problems that require its attention and energy. And in the rainforest, those problems are numerous—herbivores, diseases, and growth in a nutrient-poor environment are just a few. Thanks to some simple yet extraordinary physical properties of water, the Kapok is able to meet these demands and thrive, towering over the rest of the rainforest and inspiring us with its awesome size and beauty—what little of it we can appreciate from just its giant roots, anyway.