For those hoping to view wildlife, a visit to a tropical rainforest can be quite a frustrating experience. Unlike on the plains of Africa, rainforest animals can very easily conceal themselves among the dense vegetation, under a forest canopy that permits very little light to pass through. To make matters worse, many species avoid detection by resemblance to non-animal objects in their environment. Here, insects are the ultimate masters of disguise: stick insects and leaf-mimicking katydids imitate twigs and leaves—some even come complete with tiny spots meant to mimic diseased or chewed leaf bits. Still other insects sport patterns that allow them to blend in seamlessly on lichen-covered tropical tree trunks, some even with tiny frills and flourishes that bear an uncanny resemblance to mosses, fungi, and tree bark. By remaining unseen, small insects survive in a world teeming with hungry predators. Only one who is attuned to the jungle environment and the cryptic habits of its invertebrate denizens will appreciate the true, albeit hidden abundance of rainforest insects. 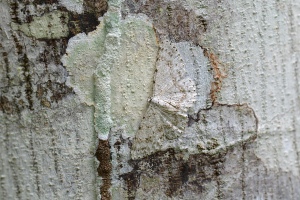 A geometer moth (family Geometridae) waits out the day on a lichen-covered tree in the Peruvian Amazon.

However, not all insects in the rainforest survive by hiding. Many biting and stinging insects—bees and wasps, mostly—invest little in camouflage, instead inviting hunters to attack with flashy colors and conspicuous behaviors. Those that do so are surprised by an unexpected counterattack and quickly learn that there are probably easier meals to be had. Importantly, predators are capable of remembering an unpleasant attempt to make a meal of an angry wasp, or an excited hive of stinging bees. So the rainforest, then, is full of predators, but those that have learned to avoid stinging insects—most predators probably learn this very early on—avoid insects that pack painful bites and stings. Given the extraordinary abundance of bees and wasps in the rainforest, this strategy appears to serve them well.

Below is a an example of just such a stinging insect: a wasp, right? Wrong. This is a picture of a katydid, a harmless relative of the crickets and grasshoppers. Biologists call such an animal a mimic: the katydid has escaped predation through protective resemblance—mimicry—of the much more noxious, stinging wasp, its model. In this case, the wasp must invest not only in a costly stinger and venom, but also in educating predators of its painful sting. The katydid knows nothing of these investments. 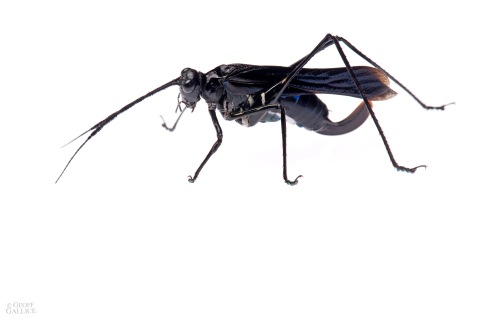 This katydid–Aganacris pseudosphex–is an uncanny wasp mimic. Not only does the katydid resemble the stinging insect, it also behaves like it. Despite their resemblance, the two are very much unrelated evolutionarily.

Amazingly, this katydid takes its trade one big step further than mere resemblance. Not only has this species foregone the typical, protective green coloration of most katydids, it has abandoned nearly every characteristic that makes it identifiable as a katydid at all. Instead of using its powerful hind legs for jumping the way katydids, crickets and grasshoppers tend to do, this individual gets where it needs to go by flying—in precisely the manner the wasp does. When it flies, the long hind legs trail behind, making the katydid nearly indistinguishable from its wasp model in flight. Even the antennae contribute to the deception, gesticulating back and forth, side to side, in a decidedly unkatydid-like, but wholly wasp-like manner. The katydid’s mimicry is exact to the finest detail.

Mimicry—the convergence, in this case, of not only the appearance but also the behavior of creatures as distantly related as a wasp and a katydid—is a potent testament to the transformative power of natural selection. And the wasp-mimicking katydid is but one example. The rainforest is overflowing with such wonder, if only we have the patience, and the eye, to look for it.

Bright colors in nature generally indicate danger. A brightly colored animal, for instance, typically uses its flashy hues to warn potential predators of a threat it might pose. Usually that threat is chemical: animals, ranging from insects and other invertebrates to frogs and snakes, have evolved a bewildering array of toxic poisons, venoms, and other chemical surprises that await would-be enemies. Bright colors help predators remember unpleasant experiences—they quickly learn to avoid the colorful meal that made them sick or stung them.

The passion-vine butterflies are a group of brightly colored or aposematic butterflies found throughout the rainforests of Central and South America. The most diverse genus is Heliconius and, as its common name suggests, this group of butterflies feeds on passion vines that are loaded with compounds known as cyanogenic glycosides—you don’t need to be a biochemist to guess that the cyan at the beginning of that name means it isn’t good to eat.

Heliconius butterflies typically have bright, contrasting colors and patterns covering the wings. This individual belongs to the ‘tiger’ mimicry complex. Photo by Alias 0591 on Flickr.

The glycosides are not harmful to Heliconiusbutterflies though. In fact, the butterfly larvae greedily devour vines that are high in these compounds. From them they are able to synthesize derivatives—similar chemical forms—that can be stored in the butterfly’s tissues.

A caterpillar of Heliconius charitonia feeds on a passion vine, the source of these butterflies’ protective glycoside compounds. Photo by Dean Morley, Flickr.

Thanks to its diet of passion vines, a Heliconius butterfly is a mouthful of toxic, foul-tasting poison to a predator, which, in the day at least, is usually a bird. And since Heliconius are brightly colored, birds quickly learn to avoid them. Thus, the butterflies are chemically defended and, once the local birds have been educated, have essentially no diurnal enemies.

But what happens at night, when visual signals are less effective as a warning to nocturnal predators that hunt without good eyesight? Bats, for instance, hunt at night using echolocation or sonar, in which high-frequency sounds are produced and distance and direction to prey are judged largely by the time taken for the sounds to bounce, or echo, back to the bat’s ears. With echolocation, eyesight is unnecessary, and bats that echolocate are able to hunt very effectively even in total darkness. Many have monochromatic or otherwise very poor vision.

Heliconius butteflies get their color from pigmented scales that cover the wing surface. Bright reds and yellows contrast well with velvety blacks, making for a strong, visible signal. Photo by the Butterfly Genetics Group, Cambridge Univ.

One peculiar aspect of Heliconius butterfly biology is their roosting behavior—that is, at night, they sleep collectively in aggregations. Roosts may contain as many as 10-15 individuals, although typically the number is less. The butterflies begin to gather at sunset and take as much as one hour to settle in for the night; they use tiny hooks at the ends of their feet to hang, upside down, from nearby small branches and the tips of dead twigs. 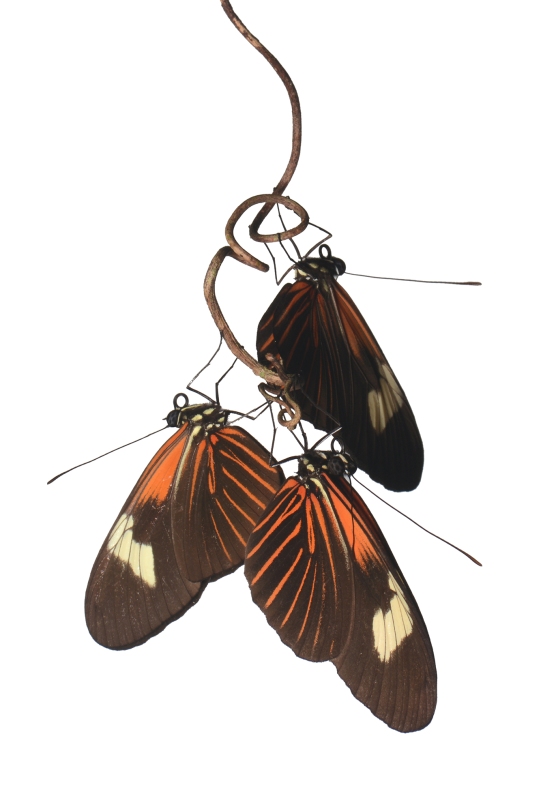 A small Heliconius roost, composed of only three individuals, in the lowland rainforest of Manu National Park, in Peru. Photographed using the Meet Your Neighbours-style field studio, in situ.

Many biologists believe that animals aggregate in order to dilute the effects of predation. Think of the chances of a buffalo being picked off by a lion alone versus in a large herd. The same should be true for aposematic butterflies in the daytime—considering that their bright colors most likely serve as a warning to birds, daytime Heliconius roosts would make a lot of sense. But the butterflies roost together at night, and it’s not clear why.

As a graduate student interested in tropical butterfly biology at the University of Florida, Christian Salcedo wanted to understand why Heliconius roost at night. Do the butterflies have any predators? Could they be using unseen signals to fend off attack, much in the way they use color in the day?

Salcedo decided to employ technology to study the question of Heliconius roosting at night. He created a camera system—he called it a “stand-alone nocturnal infrared camera system”—that would catch Heliconius predators in the act by activating video when an infrared beam was crossed.

After a number of nights the remote cameras had recorded several disturbance events, during which an animal—there was an agouti, an armadillo, a rabbit, and even a few stick insects—disturbed the butterflies, causing one or more of them to rouse momentarily from their sleep. In a jungle bumping with nocturnal creatures, this wasn’t very surprising. However, the most interesting event occurred when a bat was observed picking a Heliconius butterfly from its roost. Several moments later, the butterfly returned, apparently unharmed, to its roost-mates. Of course, Salcedo captured the event on video.

In some ways, these experiments shed light on the mysterious Heliconius night roosts. Based on the footage gathered with the remote camera system, we now know that Heliconius probably do have nocturnal predators. But the fact that the cameras recorded a butterfly returning to the roost after an attack, unharmed, actually raises many more questions.

Did the cameras capture an instance of predator education? That is, the bat clearly tried but did not eat the butterfly—in the video, do we witness the learning event that results in other Heliconius avoiding attack by at least this individual bat? If so, how can the bat recognize future roosting Heliconius and know to stay away?

Some bats are able to see ultraviolet light, which is reflected by parts of the wings of Heliconius. Could that be the key mechanism? Or perhaps predators like bats are able to smell pheromones or other chemical signals produced by the butterflies that act in a similar way as bright colors in the daytime, preventing a repeat bad-taste experience. Do bats typically capture prey and assess their palatability before deciding to devour them or let them go unharmed?

Video footage of a nocturnal attack is tantalizing, but we still have a lot to learn about the roosting behavior of Heliconius butterflies. The rarity of nocturnal attacks on the butterflies—Salcedo’s experimental roosts were attacked only several times in hundreds of hours of filming—make the matter of studying them more difficult. But, as is increasingly the case, technology coupled with a curious, motivated young graduate student willing to brave long, late hours and harsh tropical conditions can make great discoveries regarding the fascinating phenomenon of the roosting passion-vine butterflies.